We had to catch Gigi Ibrahim and Syrian election coverage on The Daily Show b/c El Barnamej canceled.

“Could you imagine a country that would strip civil rights under the guise of fighting terrorism… we are not so different, you and I.” ~Jon Stewart as he interviews Egyptian activist, Gigi Ibrahim on the “common ground” shared by US and Egypt.

American satirist, Jon Stewart, alluded to the common ground that the U.S. and Egypt may share: suspending civil liberties to better protect national security interests–the “Greater Good”.  (Pitaconsumers: try not to chuckle, then cringe, at the use of “greater good”.)  Satire fans may recall from the film “Hot Fuzz”, which satirizes society’s attempt to destroy the individual for his or her ultimate welfare.  On this note, weapons support to the Egyptian government continues for combating terrorism–despite the US freeze on Egypt, reports Middle East Eye.

Fortunately (and unfortunately) The Daily Show covered Syria’s sham elections and Egypt’s 41,000 political prisoners as best as any satirical news can do–arguably even better than any “real” Syrian or Egyptian news program… Does Syrian news reporting explain why Syrian voters must mark their ballots with a drop of blood from their fingers or why even Bashar al-Assad’s opponents refuse to criticize him on policy?  Political cartoons seem to do a better job illustrating how Syrians vote in blood. 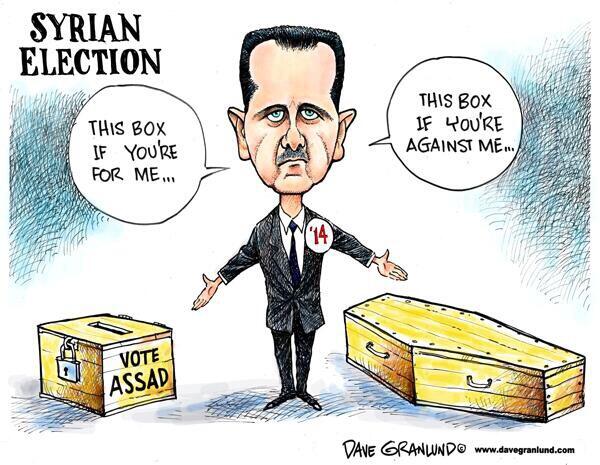 Bashar Al-Assad  won presidential #elections with 88.7 percent of votes.  We find it impossible to believe that Syrian elections produced a 73.42 percent voter turnout.

Withdrawal and Withdrawing from Public

Now that Bassem Youssef’s Egyptian satire program, El-Barnamej, is gone, we are going through withdrawal.  Youssef’s commentary and interviews covered social, economic, and political issues in Egypt — one of the reasons Egypt used to be considered a media hub for the MENA region, and had no Arab media rival throughout the 1980s and 1990s …  until Al-Jazeera’s launch.

So it is with some sad resignation that we could only make up for this withdrawal by catching Egyptian human rights and social justice activist, Gigi Ibrahim’s, visit to The Daily Show, hosted by Jon Stewart.  Stewart invited Ibrahim in 2011 immediately after Hosni Mubarak’s removal.  Check out her remarks: