Quantity or Quality: The Push for Women’s Representation in Arab Politics

The push for women’s representation in Arab politics draws much attention by both human rights groups and democracy building groups. For example, the National Democratic Institute hosted Members of Parliament from Jordan, Morocco, Libya, and Tunisia to discuss “Women in the New Arab Politics”.  Although the MPs all shared in the struggle to amplify women’s voices, each one had a slightly different take on which path could bring about more

positive impact in amplifying Arab women’s voice in legislative politics.  Specifically, the “quantity versus quality” debate to increase women’s political representation in Arab politics came up: is it better to push for higher numbers of women in parliament–regardless of their internal dynamics–or focus on the quality of candidates so that they are better able to collectively bargain and form coalitions on issues beyond family status laws–like on the economy, defense budgets and not just the “soft” issues of cultural outreach and education.

But the debate should not de-emphasize the gains that female parliamentarians have produced for society.  Women parliamentarians are not just focused on women and family rights.  “In Jordan, because of our constitution, we have stopped the practice of trying civilians in military courts,” said one of the MPs visiting from Jordan.

Earlier, the Wilson Center hosted an event that broadly focused on the public and private space opening, or closing, for women in the Middle East & North Africa region earlier in 2014. PITAPOLICY’s summary and analysis on that event may be found here.

Quotas
If an underrepresented group faced a choice between more representatives in parliament, or less representatives, the group would argue for more representation. That’s a simple numbers game that –one would hope–would advance the underrepresented group’s interests.  The goal is to achieve impact.  However, what if this underrepresented group, let us say women, had to choose between quantity or quality.  Some female Members of Parliament would push for quantity.  As one second-term MP from Jordan said, “we still need a certain quantity in order to have get that quality of service heard.”  On the other hand, other female MPs would argue for quality in the types of female candidates because of the politics behind debating legislation among women.  She fears that there is not a consensus among women MPs, who are still hesitant to press for more women’s rights.  Moreover, she argues that there needs to be more unity on specific issues, like advancing women’s rights.    That way, rallying support is easier to form a bloc to pass or lead on legislation that favor women.

Many on the panel say a quota system is a necessary measure until the inclusion of women in political process holds constant within Arab society. To be fair, countries that pride themselves on leading democratic processes through legislative representation, still struggle with disproportionate levels of female legislators. For example, only 20 of the 100 U.S. Senate seats (the American equivalent of the ‘Upper House’) are held by women, according to The Washington Post. The U.S. has not implemented a quota system for women or minorities to address their under-representation in the Senate or the House of Representatives.

“Will part of women’s equality issue be solved in time because of generational changes?” asked the moderator, Tamara Coffman-Wittes from the Brookings Institute Saban Center. Each of the panelists expressed optimism as long as their countries’ legislative processes include female MPs. For example, the Jordanian MP said she was “very optimistic” because Jordan amended many laws in the 1990s.

Below are highlighted comments from Members of Parliament representing their countries. Ironically, Libya’s representative on the issue of women’s representation, was, in fact, a man.

Morocco: Member of Parliament, attorney who previously litigated in criminal court prior to serving. 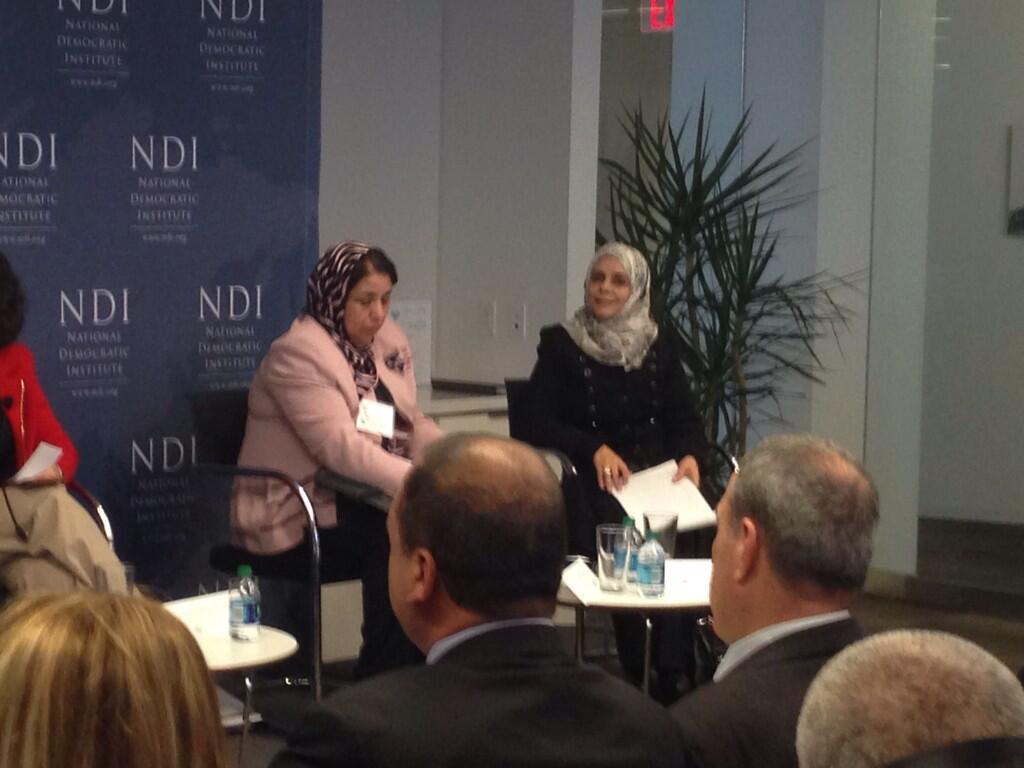