Sometimes, we wish the U.S. offered as many presidential candidates on the final ballot– like some Arab countries demonstrated in the last four years.  We are not kidding or being facetious.  Why?  Tunisian voters aren’t yet stuck with the two-party choice.  But one thing American elections do share in common with Tunisian elections: certain old guys keep coming back to race.  We call it “fringe benefits of crony constituency”–or “nostalgia-era” candidates depending on their name recognition, more than their actual historical policy association, to move forward, again.-Mehrunisa Qayyum

On Sunday November 23rd, Tunisia held its first democratically elected presidential election since transitioning from authoritarian rule.  Unlike the U.S., where presidential candidates think of campaigning two years before the November elections–wasting hundreds of millions of dollars in campaigning instead of reinvesting extra funds into public works projects–Tunisia actually listed more than two candidates on the actual ballot–21 were on the ballot.  Unlike the parliamentary elections, The Ennahda Party did not run a presidential candidates.  (Nidaa Tounis Party won the majority in parliament last month.)  The two leading candidates, current interim-President Moncef Marzouki of the Congress for the Republic Party, and Baji Caid Essebsi of Nidaa Tounis Party,  will run off in a second round of voting in one month on December 28th.

Second place candidate, Marzouki, earned 33.43% of the vote.  Criticized by his opponents for living abroad, he continued with his human rights activities while living in France.  (Note, most of the opposition candidates of Ben Ali’s regime lived abroad if they weren’t imprisoned–journalist and TV channel owner, Mohamed Hechmi Hamdi, serves as another example of presidential candidates who lived abroad.) He is a human rights activist and physician who was also arrested in the nineties for his political opposition to Ben Ali.   In 2001, Marzouki founded the Congress for the Republic Party, which was banned during the Ben Ali regime, and forced Marzouki to reside in Europe again.   Unlike his opponents, he traveled to South Africa to learn about their post-Apartheid transitional period.

Essebsi earned about 39.46% of the vote.  He presents a cliche case of “regime-era experience” during the time of the Ben Ali policy and practices.  Essebsi is 87 years old and, yes, bring “loads” of experience to the presidential race.  Two questions for Tunisians is: 1) can a relic–excuse us–remnant provide integrity to the political process given that corruption was one of the triggers of discontent? and 2) We repeat, Essebsi is 87 years old… too uncanny of a resemblance to their next door neighbor’s presidential “situation”.

Voting in Tunisia triggered many observations ranging from the helpful to the “You’ve got to be joking” points.  For example, on the helpful front, the International Foundation for Election Systems prepared a visual illustrating voting information as shown below in both Arabic and French for Tunisian voters. 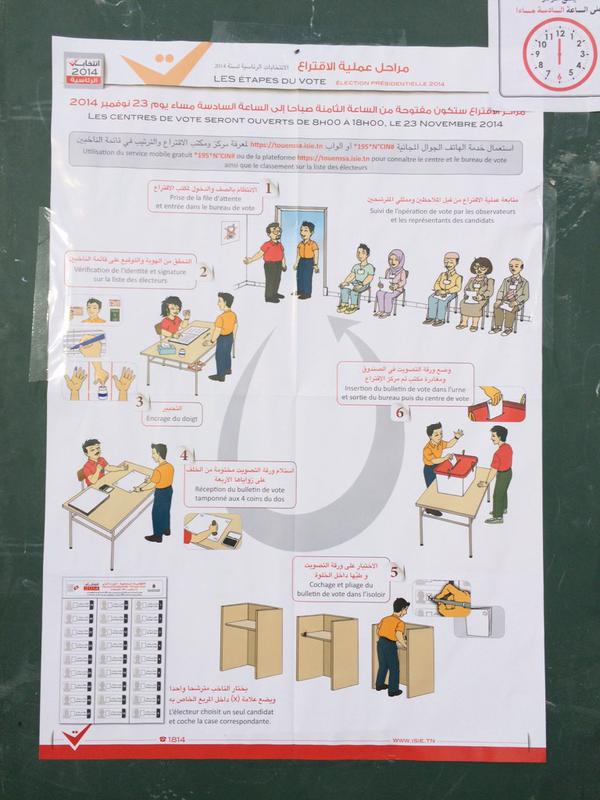 For those interested in looking at the moment to moment observations online, here were the memes focusing on Tunisian elections:

Our favorite observation was the one shared by @T-78Himself who said:

Dear correspondents: women in #Tunisia have the right to vote since 1957. Women casting their votes isn’t news. FYI. #TnElec2014

He’s absolutely right: there’s no need to keep focusing on images of women voting AS IF this is revolutionary…when in fact the revolutionary aspect may be that women voters may have higher expectations of their presidential candidates than male voters–if anybody bothered to ask or survey on issues of policy change.

How did Tunisians vote?  Given that 69% of eligible voters participated in the last election, the current election saw a slight decrease: 65% eligible Tunisian voters voted– still higher than the rates of democracies of the United States, which was 57.2% in the U.S. 2012 Presidential election, according to the Bipartisan Policy Center.  Of that 65%, about a 16.89% were voters from Tunisians casting a ballot from abroad, as shown below in the second image after the poll results. 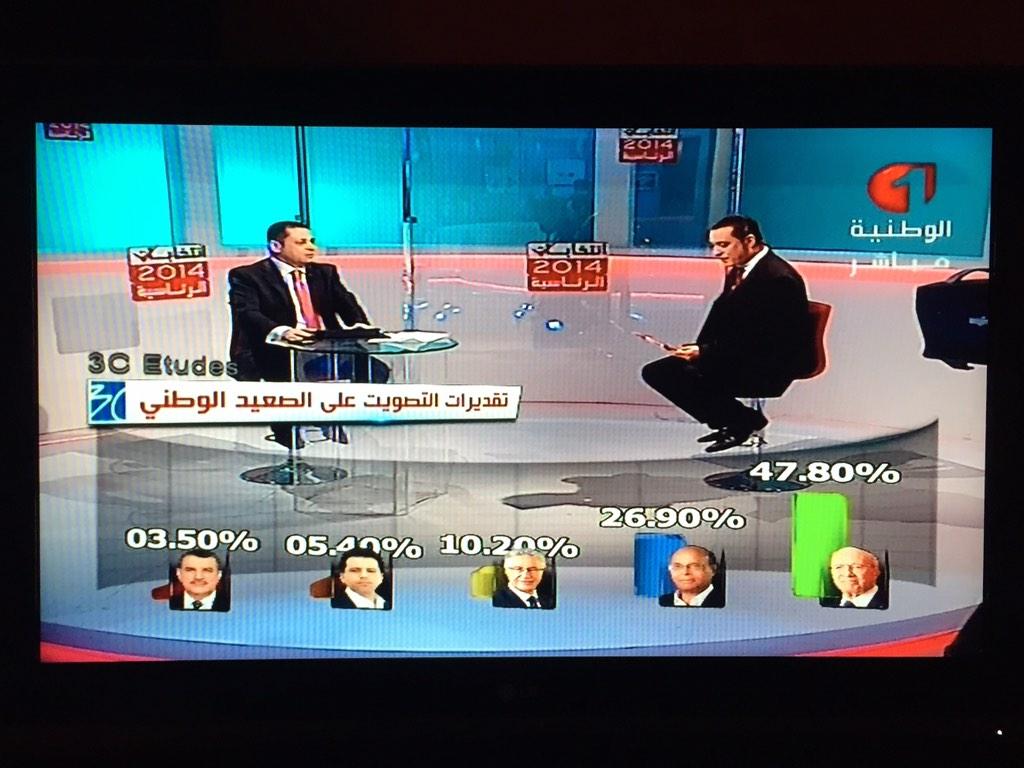 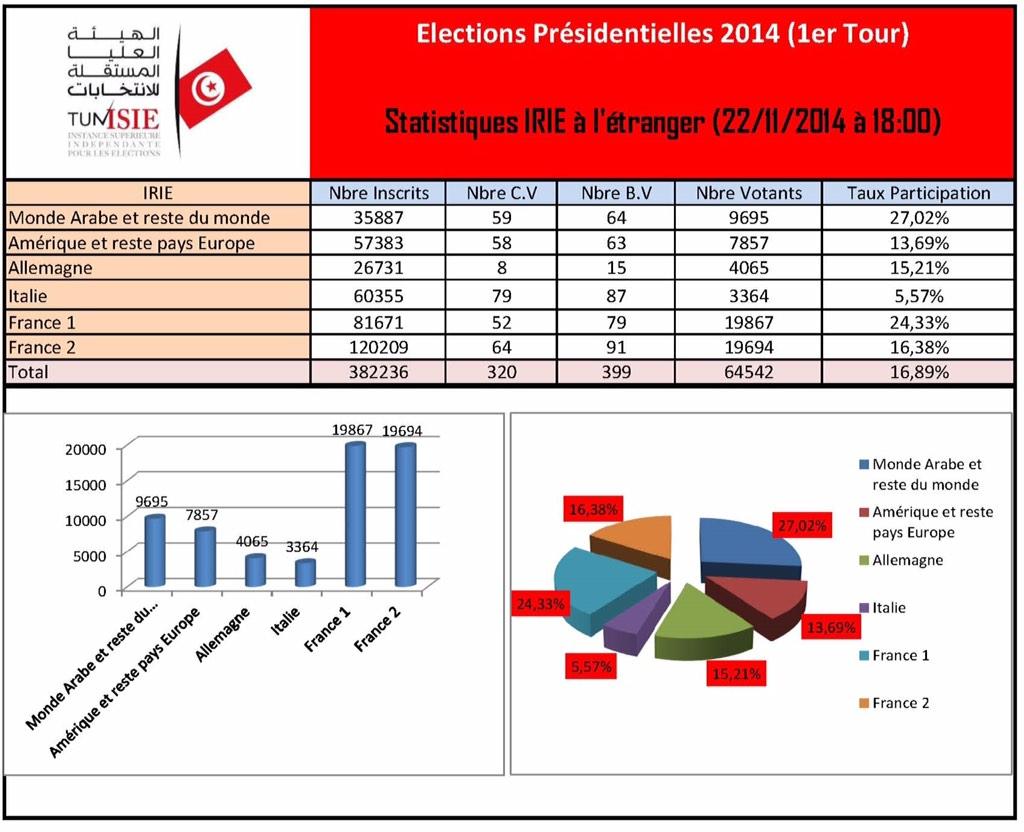 Not Just “Youth”, But Young Adults

Discontent about unemployment and other challenges continued to operate as the leading election concerns.  Yasmine Ryan made a short film on by @yasmineryan on #Tunisia‘s disenchanted youth.  Although a valiant effort,  we would argue such comments are not just “youth experienced” and hesitate to frame these challenges as such because, 32 year olds dissatisfied with underemployment are grown adult men and women and not just a cohort of teen-angst ridden individuals.  The “youth” category is a misnomer because it belittles the responsibilities and role that a large segment of the “youth” have–such as heading households, politically engaging, paying rent, and other adult responsibilities.