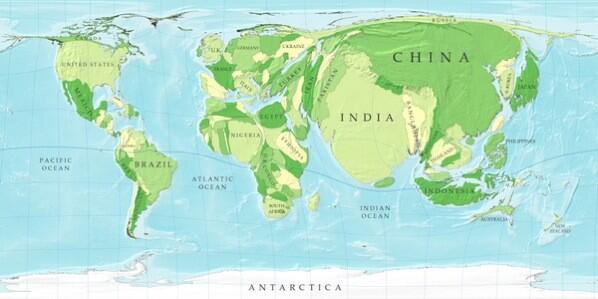 “The world with all countries resized to their population” Source: Twitter @RichardMclellan

Public finance is a given when it comes to overseeing public sector corruption and holding people accountable.  Recently, Turkey’s Prime Minister and Iraq’s public sector triggered more distrust as corruption trickles into hiring practices, according to the National Democratic Institute and the Wall Street Journal.  But private sector corruption does not invite the same amount of attention in the media.  Often, public sector corruption accompanies some business operations looking to increase profits.  A couple of oil and media company names come to mind when public money meets private industry…or in “public-private partnerships” like Weatherford, International’s role in a UN programme.

Known as ‘Business Integrity’, The Organisation for Economic Cooperation & Development (OECD) recognizes the need to monitor private sector corruption as it impacts investment climate and ability to attract foreign investment, “Responsible behavior in business and investment is more likely to contribute to sustainable development and employment creation.”  Guidelines for multi-national corporations and MENA responsible business conduct hint that private sector corruption require similar levels of scrutiny in the public eye BECAUSE the private sector can negatively impact the public with their behind the scenes operations.  In a survey reported by the Financial Times, business leaders in the MENA region are almost twice as likely to engage in bribery and other corrupt practices compared to their global counterparts.

Aside from public and private sector, the military is like a third wheel when it comes to financial accountability.  It represents its own sort of sector in that it needs public funding, yet does not experience the same level of budgetary oversight.  At the same time, the military is that rare hybrid of people who transition into the private sector since many retire early, or enter private security contractor jobs.  The military sector is in the gray area when it comes to property ownership–look at Egypt, Algeria, and Lebanon.  So what’s really surprising? Transparency International’s 2013 study showed that 107 countries’ respondents did NOT see its military as an institution facing corruption.

Speaking of public finance, earlier this week, Saudi Arabia passed its largest budget yet.  As the world’s largest oil exporter, Saudi Arabia still faces the same challenges it did 10 years ago.  The same warnings apply:

The IMF told Saudi Arabia this year it was spending more than it should if it wanted to preserve oil wealth for future generations, and that its state budget could fall into deficit by 2016 if expenditure continued rising fast. ~Agence Free Press