PITAPOLICY blogged about the U.S. President of the United States first overseas trip, which included commentary on ’45’s visit to Saudi Arabia and the unusual Qatar crisis that followed–coincidentally–where Qatar’s ambassadors were given 48 hours to leave the United Arab Emirates and Bahrain on June 4th.  (Yes: Right in the middle of Ramadan where all of these nations are observing this month long holiday of fasting and patience.)  We were really excited to repost an well-written op-ed by Arab American law professor, Sahar Aziz, who served in the U.S Department of Justice during the Obama administration.  Then, suddenly, the post vanished due to a technology glitch from our site’s end.  (At the worst moment, perhaps some bad words blaming a jinn were uttered.)  Apologies. Now after a week of recollecting what we wrote (and tracking down the sources again), a new development in the Qatar crisis shows that hacking and cyberterrorism played a more significant, pre-meditated role with financial implications for the wealthiest economies in the Middle East & North African region.  We are looking at this second attempt to blog on the Qatar shutout as redemption for the initial frustration with Saudi Arabia’s decision to award ’45’ –not an American museum–with a token gift of the sword.

First things first, let’s revisit what we initially reposted by Sahar Aziz in her op-ed to CNN regarding ’45’s’ visit of holy sites that, thankfully, did not go up in flames.

Editor’s Note: Sahar Aziz is an associate professor at Texas A&M University School of Law and nonresident fellow at Brookings Doha Center. She is the author of Rethinking Counterterrorism in the Age of ISIS. The views expressed are her own.

(CNN) If there’s one thing we’ve learned about Donald Trump, it is that he has no qualms about contradicting himself to get what he wants. In Saudi Arabia, he wanted a $110 billion arms deal — not to promote peace and tolerance, as he later proclaimed in his Sunday speech.

Thus, his speech will not “be remembered as the beginning of peace in the Middle East,” as he loftily put it, but rather a boost to the war that is ravaging it. Nor will Trump’s speech put an end to the Islamophobia and bigotry that he has spent the past two years inciting. After all, he needs scapegoats to blame when the terrorism in the Middle East inevitably reaches the United States. 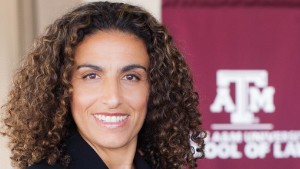 Sahar Aziz
Given Trump’s opportunistic leadership style — what he calls “principled realism”– we can expect more contradictions between his rhetoric and his actions. Four specific contradictions warrant exploring to predict what is in store for American foreign policy in the Middle East, as well as for the treatment of Muslims in the United States.
First, Trump preaches peace and prosperity in his speech, but then sells weapons to the Saudis, which will inevitably fuel war. Trump treats terrorism in the Middle East as a business opportunity to create jobs at home and enrich defense industry tycoons.
While addressing the world’s longest-ruling dictators about terrorism, Trump failed to mention how state violence and repression feeds ISIS and al Qaeda’s propaganda campaigns. Instead, he proclaims the Arab leaders to be defenders of the people’s freedom. As he advised his allies to allow “young Muslim boys and girls (to) be able to grow up free from fear, safe from violence and innocent of hatred,” he disingenuously pretended that the Arab Spring never occurred. The people revolted against their authoritarian governments seeking just those things, but found themselves abandoned by the United States and violently repressed by Arab regimes — which he is once again arming.

Thus, we should not expect any meaningful attempts by the Trump administration to decrease terrorism in the region. Rather, the focus of US counterterrorism strategy will be to geographically contain the violence within the Middle East and prevent it from crossing the Atlantic.
This brings us to the second of Trump’s contradictions — deliberately disconnecting Islam from terrorism in his speech to his Saudi arms purchasers while bolstering Islamophobia in the United States. Over the past two years, Trump has repeatedly stated that “Islam hates us” and Islam is a “hateful foreign ideology,” a kind of rhetoric that has emboldened his white nationalist supporters to discriminate against and attack Muslims. The growing anti-Muslim bigotry could give his administration free rein to disproportionately target Muslims in counterterrorism investigations, surveillance and prosecutions.
Third, there is little evidence Trump is willing to participate in the global effort to “counter extremist ideology,” a new term he strategically coined instead of “radical Islamic terrorism” that he’s been peddling to his right-wing base. As Trump announced a “groundbreaking new center (that) represent(ed) a clear declaration that Muslim-majority countries must take the lead in combatting radicalization,” he took no responsibility for his own divisive rhetoric that radicalizes the political right in the United States. Indeed, over the past five years, extremist ideology from the right has risen at troubling levels.
Accordingly, we should expect the continued use of “radical Islamic terrorism” in his speeches to American audiences and willful blindness to the rise in violence of the alt-right, right-wing militia groups, and the Ku Klux Klan.
Finally, Trump stated that in “the scenes of destruction, in the wake of terror, we see no signs that those murdered were Jewish or Christian, Shia or Sunni.” Here he intimates sympathy for Muslims, even as his domestic policies single out and discriminate against Muslims. His first executive order barred millions of people from Muslim-majority countries from lawfully entering the United States. The refugee clause in the order applied only to Muslim Syrian refugees while exempting Christian Syrian refugees — as if the lives of the hundreds of thousands of Muslim Syrians killed were of no value. And in all of his speeches warning about terrorism committed by Muslims, he has never acknowledged the rise in hate crimes, mosque vandalizations and bullying suffered by Muslims in the United States. For Trump, there is a major difference between Muslims and everyone else.
While citizens in the Middle East and America may find his contradictions repugnant, his audience in Saudi Arabia will not. On the contrary, Middle East authoritarians see Trump as a fellow demagogue who will do whatever it takes to get what he wants. And what he wants has little to do with peace, stability and prosperity for the people of the Middle East.

As Aziz reviews ’45’s’ Saudi trip through the counter-terrorism lens, we agree with her political conclusions regarding his interests overlapping with other authoritarian leaders’ interests, and not with either the American people or people of the Middle East.  Aziz’s parallel commentary on the hypocrisy of focusing on terrorism, born out of extremist ideologies in other countries, and not the extremist ideologies that have transformed into violent actions (a.k.a. terrorism) carried out by certain white-supremacist movements in the U.S., hit home for PITAPOLICY.

However, the issue of ’45’ negotiating a final 110 billion U.S.-dollar deal in arms sales to the Gulf countries is “sad” (to quote ’45’ in his own self-aggrandizing terms): an arms sales #FAIL. Yes, a fail,  just like he conflated his “counter-terrorism” speech in Saudi Arabia with believing he addressed the Middle East crisis.  Again, he conflated his negotiation skills and confused it with deals that took years to finalize.   There was no 110 Billion dollar deal, as Brookings Institute Fellow, Bruce Riedel, revealed:

I’ve spoken to contacts in the defense business and on the Hill, and all of them say the same thing: There is no $110 billion deal. Instead, there are a bunch of letters of interest or intent, but not contracts. Many are offers that the defense industry thinks the Saudis will be interested in someday. So far nothing has been notified to the Senate for review. The Defense Security Cooperation Agency, the arms sales wing of the Pentagon, calls them “intended sales.” None of the deals identified so far are new, all began in the Obama administration.~Bruce Riedel in Markaz

Basically, one cannot even believe how ’45’ claims financial success for America or his ability to really broker diplomacy within a region that has become home to over 10 American military bases. At the same time, he pontificates about terrorism, but does not even see the irony of promoting weapons sales to countries, like Saudi Arabia, Bahrain, and Kuwait.
Yet, it is worth noting that the Bahrain is home to the U.S. Navy’s fifth fleet.  Saudi Arabia and Qatar also host a few U.S. military bases.  Specifically, Qatar hosts the American al-Udeid airbase.  The UAE is begging for one too, apparently.  See Figure 1, which shows how the U.S. leads among U.N. permanent members in military bases throughout the Middle East.  Note how Russia has none.  Then view Figure 2 to see where Russia deploys military bases.  We will revisit this military base disparity in a moment.

Initially, leaked emails allegedly revealed that Qatar funded terrorist groups.  Here is where the four Arab nations’ kerfuffle with Qatar turns stranger: the origin of the leaked emails may lead back to the UAE ambassador to the United States, Yousef al-Otaiba, for the following motivations:

Since our last attempt to discuss the fallout from ’45’s’ visit, Qatar’s 2.7 million people may face a food shortage since 38 percent of its food comes from Saudi Arabia and the UAE.  An opportunity for neighboring Iran emerges if Qatar decides to buy their food from them. Nonetheless, Qatar leads the world in Liquified Natural Gas production.  Qatar’s other two leading sectors: manufacturing and transport –which have respectively dropped 18% and 31% since 2017 began–may face further decline resulting from the Arab blockade.

Unfortunately, the main issue– who is financing terrorist groups– is swinging in a limbo of authenticating emails and identifying the truth.  Investigations show that Russia may be the source of a disinformation campaign through cyber terrorism.  But they were not alone; the disinformation campaign served the interests of other nations too, like the UAE and Israel.

Remember our earlier point about the stark contrast between the number of U.S. and Russian bases in the Middle East?

Unfortunately, Russia has figured that out before us.

By the way: we are still troubled by Saudi Arabia giving a sword to ’45’ as much as we are troubled by his bragging about a so-called arms deal that his administration actually did not orchestrate within a four-month period.